Rosa, Opal, Emerald, and Houda have limited clothing options. Yes, they can fit the Get Set dolls' pants. So that would be a pair of black nylon pull-on pants. If, you have Get Set doll pants, which most collectors probably won't have because the Get Set dolls did not have a long production run.

Yes, the Mixis can wear Ken pants, but the lines are wrong for them. The Ken pants have straight lines; the Mixis have curvy bodies. Possibly the gold harem pants of the Arabian Nights Ken could work. Regular Ken pants though look as though the girls are borrowing their boyfriends' pants.

The Mixis can - just - fit the Get Real Girls' tops and some of the GRG jackets. But the GRG pants are too narrow.

Note 1: the black pants for Valerie of Josie and the Pussycats stain the doll's body.

Note 2: Jakks Pacific produced two other fashion dolls, Catalina and Damita, around 2005. These dolls' figures are closer to swimsuit Barbies' figures. The three pants shown on the box for this series would probably NOT fit the Mixis dolls.

For photos and comments comparing the Mixis with other playscale dolls see this entry. 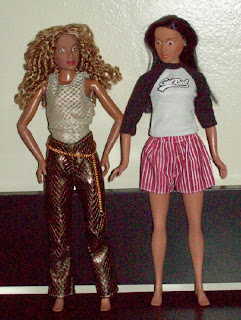 Opal in My Scene guy top and Jakks Pacific pants; Emerald in Get Real Girl top and Ken shorts 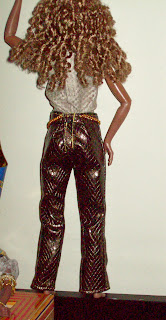 Second view of Opal in My Scene guy top and Jakks Pacific pants
Posted by D7ana at 9:59 AM

I think they want you to sew for them. Hehehe.

I hate it when the doll gets discolored because of the fabric (not just the black ones). Sometimes, I'm thinking if I should store my dolls naked.

They definitely want me to sew for them LOL Jakks Pacific didn't make extra fashions. It won't be a pretty picture when Josie decides she wants her snakeskins back.

I think my dolls would like to be stored nude in white silk or white cotton sheets. That's not likely, given the current number I have, but they can dream, yes? Hahaha.

Do the mixis have articulated legs/knees? The website says that they do but there is no visible joint...

The Mixis dolls out to date - the Limited Edition and the Sunset Edition - have click bend knees like most Barbies. (Not like the poser Barbies, Momokos, Susie, or current Fashion Royalty dolls with jointed knees.) Whoever wrote that the Mixis were articulate probably considered the bend knees as "articulate."