More Information About the Former Princess of Japan (Mattel)

These photos are for Kim and Ms. Leo as response to their queries about the former Princess of Japan Barbie. In the first photo, POJ Barbie sits between Volks' Kana and Mattel's Lea. POJ Barbie's hair color is darker than the warm dark brown of Kana's hair, but it is lighter than the jet black of Lea's hair. 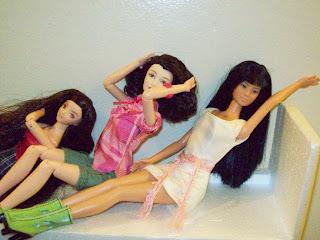 In the second photo, POJ Barbie hugs her former body - an event only possible in East Philly and similar doll/action figure zones, lol. POJ Barbie is only the tiniest bit taller than she was on the Skipper Barbie body. So anyone interested in re-bodying their Skipper and other young teen dolls, the Liv bodies make excellent and in-scale new bodies. 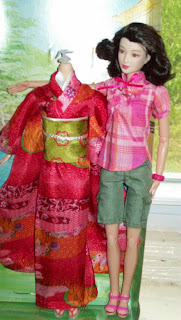 P.S. Lea's feet are not large enough to wear the Lollipop dolls boots, but her small feet can pull them on for this photo.
Posted by D7ana at 5:59 PM

Thanks so much for this post! You info will help me with my storyline that I will be doing. I can always count on you D7ana!

I think I'm off to find myself a PoJ. That doll is gorgeous and seeing her several times in a row has made me unable to get her face out of my head. Enabling!
I love Liv bodies. I hope these dolls stick around permanently just like Bratz. I wonder how much of the line's success was caused by collectors, either buying them to rebody or for their clothes, or for the Livs themselves.

You're welcome, Ms. Leo. I look forward to reading your next storyline.

Alrunia, PoJ is gorgeous. I am soooo glad that I bought her. (Yes, I know I am enabling, lol. Tsk. It goes round though, our enabling ;-D)

I, too, hope that the Liv dolls continue to be produced for years to come. Wouldn't it be funny if a good part of their sales was due to them being used as better - articulate - bodies?