Where is the Van Brand Pizza Today?

Well, Old G.I. Joe and Lamont Wilson had had it. Then they went out for beers for that "perfect touch," but when they returned the pizza was gone. Oh! They accused some Kens lounging nearby. The Kens denied the charge. The Joes backed down - the Kens had been discussing the merits of skinny jeans versus baggie jeans and were none too happy to have such a thrilling topic interrupted for any talk of food. Usually Kens are mild mannered, but intrusion on their fashion discussions leaves them more aggressive than usual. The Joes recognized their folly and scrammed only to encounter a few Power Team members.

"Do you have our pizza?" Lamont asked.

"No, we do not. We are in training and NOT eating pizza."

"Well, that leaves them out," Old Joe responded. "Power Team guys are soooo serious about training."

"They are at that." Lamont answered. They sighed. Well, since the pizza was gone, they might as well enjoy the beer while it was still cold. And so they did.

But where then is the mouthwatering pizza we received from Van's Doll Treasures? Hmmm ... this picture shows the pizza and the pizza thief. Tawny Tommy!

He's guarding the pizza while his girl pal Abby gets sodas and napkins. Wonder how long he'll have it? 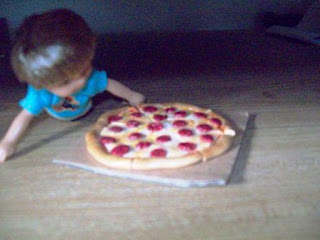 Interested in having your own Van Brand Pizza? Well, you'll have to inquire over at her blog to find out if she will be making any more. Good luck and happy eating ;-D
Posted by D7ana at 3:08 PM

Story is great! Love the ending!
Will have to go over and see if Van has any more pizza's left.

Oh that is TOO funny! Kens and their fashion talk... priceless. You really should look into stand up. I think you are a natural. If any asks, there will be more pizzas available soon. Tell Tommy to hold on tight and enjoy that pizza. I really didn't want the Joes to get it anyway.

Thanks for enjoying the story, all!

Frannie, looks like you'll be able to have some of those yummy pizzas, too. Yay!

Limbe Dolls, thanks! Actually all of my Joes are not well, so saucy, so ... difficult? Ian and Carlos and a few others are quiet. The naughtier Joes leap to the front though. The Power Team guys overall are big fitness buffs. And not a single Ken I own so far has been able to resist the lure of fashion-consciousnees. Some have "good" taste and others ... um gaudy taste, but ALL Kens have a fashion focus. Even my latest Army Ken who draws attention to the rakish air of his wine beret and how it "pops" against his "mahoghany complexion" and his tan camouflague outfit.

Hi, Vanessa. I have considered doing stand up; but I'd say, oh, I am too shy to face a crowd. Eh, but maybe I could and maybe I'd do better there than striving to be invisible as an office worker. (Just my take on office work, lol).

Old Joe and Lamont Morris and Joe Johnson - my naughtiest Joes - are hung over from too much beer on empty stomaches. They feel that you "witched" the pizza away from them so they are tip-toeing away from making any further mean comments. For now ....

As for Tawny Tommy and Adorable Abigail ... they are recovering from the overindulgence of eating a big pizza. Their mommies have given them brief lectures on the consequences of thievery and not following meal rules, but I think they feel the pizza's taste AND the fun of swiping the pizza from the Joes compensated for tummy aches and mommy lectures.