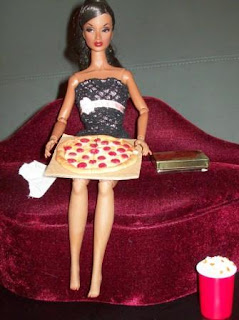 Love is NOT in the air for Integrity Toys' T.J. this year.

She had an argument with [No]Angelus.

She had a disagreement with Trevor.

She passed a modeling assignment with Lukas.

She informed the Power Team guys that football had and always would bore her.

She outraged Naomi when she confessed that she had "lost" the Whitney Houston tapes ... although she had a vague recollection that the loss occurred sometime in the morning ... just before the trash trucks pulled off.

The lost tapes was the final straw for many of the East Philadelphians because Naomi then complained to anyone who would listen that T.J. was too insensitive. Naomi-in-grief could be difficult, but Naomi-incensed-by-cruel-intolerance would madden anyone in hearing distance. So T.J.'s fans, friends, foes, and even those who barely knew her, gave her the cold shoulder.

So T.J. spent her Valentine's Day 2012 sitting on a loveseat and eating a Van Doll's pizza, a carton of popcorn, and a box of Godiva bought with her own money. She had pizza and she had chocolate and last year's set of The Closer dvds. So T.J. had a nice enough Valentine's Day after all.
Posted by D7ana at 12:03 AM

Well, more pizza for TJ, LOL. I love her, she's so stunning. I'm glad she enjoyed her Valentine's Day alone, it's not bad after all. :)

Great story! I don't know whether or not to say poor TJ, because she seems to have enjoyed the alone time. : )

Oh my. T.J. sure has ruffled some feathers hasn't she :D Nothing wrong with Valentine's Day pizza though. ;)

But chocolate and popcorn is oh so good! Especially if you mix them together LOL Not sure about the pizza though :) Glad T.J was able to salvage her Valentines day after all.

Cute story. I hope you had a better Valentine's Day than T.J.!

Hi and thanks for reading Tracy India, Georgia Girl, Alrunia, Chynadoll, and Limbe Dolls! You remember that T.J. is Integrity Toys' Dynamite Girl for Valentine's Day? Well, sometimes, she doesn't want to do the expected Valentine dance so she pulls a "T.J." (provoke people into shunning her). She's fine.

Me, I had some chocolate so I wasn't too bad either ;-D

Sometimes being by yourself is a good thing. Happy Belated Valentine's Day.

How can such a beautiful lady be alone on Valentine's Day? Tell her she was not alone. As a matter of fact, I had pizza the day before. It didn't look half as good as hers. Mine was organic with vegetables. A compromise to keep me from going to the pizza buffet that I haven't been to in over 2 yrs. So tempting. Hope your chocolate was finger licking good.

hehe, it's the price you pay for being a girl with attitude and opinion XD

Although pizza alone... oh my, I hope she doesn't eat it all or she'll lose that shapely figure XD

I really enjoyed this, T.J. will hopefully have a better Valentines next year!

Hi, I liked your blog and I personally invite you to join http://www.coollectors.com - The World's Free Collectors Zone.
We will also be happy to cooperate with your blog such as adding its link to our site.
All the best,
Diane

Hi Brini! Yes, being alone can be a good thing at times.

Hi Vanessa! Well, T.J. had the Van Doll's pepperoni pizza. So she was set for scrumptious eating. If you asked her about veggies with her pizza, she would point out the tomato sauce. Shrug. My chocolate was adequate - Hershey's, but I'll get the better stuff later this week ;-D Oh and T.J. gives you a thumbs up; other days she'd likely have chosen a veggie pizza as you did. But that day. MEAT spoke to her.

Hi Heather! Oh, no she didn't quite eat the whole pizza. She left room for the popcorn and the whole box of chocolate. (Well, they were Godivas lol.) As you and Vanessa would guess, T.J. doesn't usually eat so much and such rich, heavy foods. She wanted to defy convention and acted at will.

Hi Marta! I am happy you enjoyed the text. T.J. wanted to explore another side of Valentine's Day. I hope you had a lovely Valentine's Day, too. Your pink room for Valentine's Day is lovely. Barbie pink can be gaudy, but your pinks were more delicate and made a prettier background.

Hi Diane and I am glad that you enjoy my blog. Thanks for the URL for your blog; I have clicked to "Follow" it. So far, I do not see anything in search for playscale fashion dolls, but it can't hurt to submit stuff there to see if they generate hits.

I would be happy to swap links with you. Where would you place blog links? Thanks for your visit and your interest ;-D

Hey her box said it all..Heartbreaker TJ lives up to her title :O) I'm glad she had some goodies. I had a nice dinner and managed some kisses so that covers the chocolate.

Hi Dollz4Moi! Yes, T.J. does live up to her Heartbreaker title, lol.