Curious about how Hasbro might create a member of a pop music group? Let's look at their past work - in this case, Paul from S Club 7. What body type does he have? How accurate is the resemblance? You may have seen Paul before on the Keeping Ken site, but here he is out of his box.

First, here is Paul in his box. While we tend to associate Hasbro with G.I. Joe, Hasbro has created other doll lines before - Jem, Maxi, Destiny's Child, S Club 7, etc. so neither dolls nor capturing celebrity likeness is new for them. (Aside: although the Destiny's Child dolls are not necessarily ones to brag about. Their Beyonce was on the homely side.) 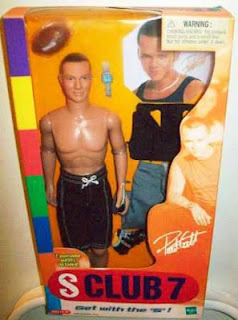 Next his body type: can you say "fashion doll?" Why? Straight arms (or permanently bent ones) and click bend knees. Manufacturers working in "fashion doll mode" did not like the look of articulated bodies. See Paul stretching to show off his plump calves; no nasty breaks for joints. 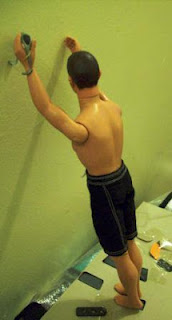 Here is Paul goofing around with two Hasbro G.I. Joes - Lamont A. Morris (1992) on Paul's right and Marvin F. Hinton (2003) on his left to show the body variety of Hasbro's male figures. Mr. Morris can twist his arms to face in or out while Mr. Hinton has joints at his elbows and wrists. All three Hasbro males from Paul's fashion doll body (straight arms and bend leg knees) to Mr. Morris' hybrid doll/action figure body (arm direction ability and bend leg knees) to Mr. Hinton's action figure body (joints at elbows, wrists, and knees) can extend their arms out from their side and spread their legs wide. So there is some additional body posing available to Hasbro figures. 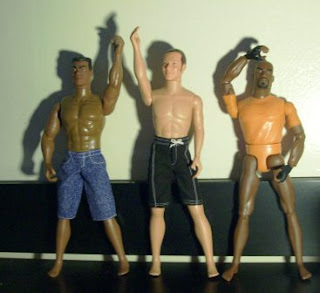 But what about the S Club 7 today? Check their updated website.
Posted by D7ana at 11:54 PM

Thanks for the info and the pics, Dana! I have Bradley McIntosh from S Club 7.

I did not know S Club 7 had dolls, haaaaaaa remembering the days from High School! The days where ABC family was Fox family and S Club 7 used to come on every Saturday and a marathon will be on Sunday! But their music was the best and Paul was my favorite next Aj from the Backstreet Boys! Oh times have change!

Thanks for the info. I am not familiar with the S Club, but I like Paul. Good to know Hasbro might do a good job with the new group.

Hello from Spain: I think Paul from S Club 7 does not much resemble the character physically real. You're right that the body is not articulated. In Spain this club 7 is not well known. Keep in touch

You're welcome, Roxanne! Congrats on getting Bradley McIntosh. He's on my list, but I don't have him yet.

Ebony Nicole, you know more than me ;-D. Finding the Paul doll was my first and only intro to the Group. I do recall the Backstreet Boys. I got them confused with N'Sync though. They had nice songs - that I remember - but not who sang what.

You're welcome, Vanessa. To this day, I still don't know what they sing, lol. But I like the figures.

Hi Marta! I can tell that the Paul doll is intended to be Paul the S Club 7 singer, but I agree that the likeness is not perfect. The singer's features are closer together, almost fitting into a triangle shape. The doll's features are spread out more.