One of the Best Flavas: Choice Awards Tre

Let's go back in time. 2003. Mattel Barbie vs. MGA Entertainment Bratz. Bratz are taking over the fashion doll market. Barbie sales are lagging. What does Mattel do? Create the Flavas line - the Mattel version of Hip Hop. Well, Barbie survives, but the Flavas? Crash and cancel.

I was disappointed. Cancelled. The Flavas had different sizes, coloring, AND face molds. Yes, there was friction from people who disliked the droopy pants and bare midriffs. Yes, there was ire from "Hip Hop" fans who thought the dolls mocked them. Yes, I thought the Flavas female dolls' heads were too big for their bodies. I could re-body them. Need I repeat - new head molds? Sigh.

So, I bought the dolls that I wanted from all the Waves that I wanted except ONE Wave: the Choice Awards Wave. Oh. That was the coolest Wave of all, but I could not find them online or off.

(Eventually, I bought Tawny from another collector. Paid more than she would have been in a store, but she was meant to be here.)

Fast forward to 2005. I'm in a Value City store in Cheltenham. Not expecting anything. Just looking. Bam! Not the Television Chef Emeril. No, that was me. Value City had Flavas Choice Awards Liam AND Tre! $3.99 EACH. The elusive ones. Giddy glad was I. I bought two of each doll. (Since then, I have sold the extra dolls to another collector.)

And for years it was enough just to have them.

Until I started deboxing dolls and action figures and came across my elusive darlings. Sigh. So I have deboxed my Awards dolls. The better to enjoy them. Wow, wow, wow! Enough commentary from me though - check the photos: 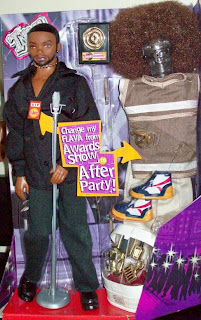 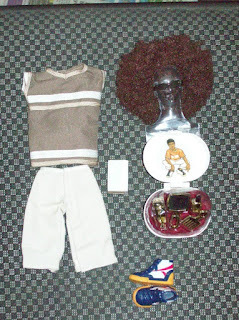 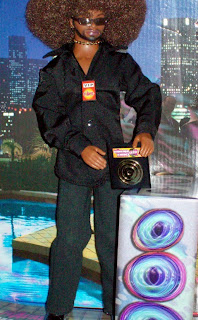 For more of my Flavas photos, check my Webshots folder.

For more information about Hip Hop.
Posted by D7ana at 8:43 PM

Wow! He looks so cool. The idea of male dolls with wigs got me thinking. Hmmm...

Oh, WOW! I have never seen these! Look at all the cool props! EEEEEEEEEEE!What an awesome find, You must have been so excited! I likd the Flavas too, although I didn't discover them until long after they were over. Like you said, different face molds. And the girls had such cool textured hair. Thanks for the photos. I'm glad you finally took them out of the box :)

I always found it interesting when some people would call it action figures and other dolls. I posted about Care Bears vs. Transformers: Gender Stereotypes in Advertisements and how we're forced into certain stereotypes...

By the way how much did you sold one of the extra dolls to the collector you mentioned?

Yay, Niel! Happy anticipating your next creative project - male dolls with wigs. Thanks for the notice. I will make sure to read that post ;-D

Smidge girl, it was the greatest luck that I found those guys. And at that price, too. Sigh. And there is nothing like opening the box and removing neat accessories. Thanks for enjoying with me :D

Hi, Jon the Action Figure Buff! Thanks for the link to that post on Gender Stereotypes. I agree that gender stereotyping exists - even in these "enlightened" and "modern" times.

I sold the guys via eBay; they sold for about $25 EACH.

Check out that huge afro... wow! What a find. Thanks to you and another collector, I recently added two Dre's to my collection and one Kiyoni Brown (lined lips and all!). Would love to have the Choice Awards Tre. Didn't even know he existed, but I was one of the ones who thought Mattel was out of their minds for glorifying the stereotypical aspects of hip-hop culture. Opinions do change.

I saw the white blonde version of this doll. He was great also!

Hi DBG! I appreciate finding the Awards Tre more as time goes by. I was aware that there was an Awards Wave, but I thought that they were limited to Canada or to an overseas market. I wish that I had checked other Value City stores at the time for more of those dolls.

I used to think that hip hop meant thugs, drugs, and violence; I'm seeing more now that a negative subset of "hip hop" music and culture gets promoted as "hip hop."

Ms. Leo, I think the Tre that you describe with the blond hair is the Party Tre.

That is an awesome 'fro. I think it would look equally good on a female doll too!

Never seen this one before. Great!

Hi, Elizabeth! I agree - Tre's afro wig would look great on either sex.

(Gives me an idea for a running gag, who's wearing Tre's wig today, LOL. Thanks!)

Hi, Kim! Glad to present a new one to you ;-D I lucked out with the two Choice Awards guys. I can't fret about the ones that got away when I look at either of those guys.

It took two years, but I finally found Choice Awards Tre. Check out my post about him here!

Yay! That is great news. I am happy for you - nothing beats the thrill of having nabbed an elusive want list doll.

I have one still in box that my sister got for me years ago for my Birthday. I Love it. I have it in a bin with my baseball cards.

Dear Unknown, Thanks for visiting and for your comment. Congratulations, that must have been a fun find to re-discover a boxed Tre. Hope you open the box and enjoy having him.