Note: this post has been created in response to a suggestion from Limbe Dolls. Thanks for the suggestion, Paulette!

Jakks Pacific, an American toy company, has produced an interesting assortment of playscale dolls and action figures. Among the figures produced were the Juku Couture line, the WWF* wrestlers, the G.I.R.L. Force series, and the Muneca de Moda, Catalina and Damita dolls.

The Muneca de Moda dolls were "blonde" Catalina and "brunette" Damita. You could "Coleccionales Todos!" by buying all four Catalinas and all four Damitas. Since the only difference among the dolls was the outfit worn, I settled with one of each doll. Their bodies are basic Barbie clones - click bend knees, straight twist and turn waists, and unbending arms that end in gracefully splayed fingers.

Had I been given my choice, I would have bought the cowgirl Damita in poncho and jeans and the dancer Catalina in red blouse and black skirt. Instead, I bought the then available floral print dressed Damita and the cream knit dressed Catalina. Shrug. 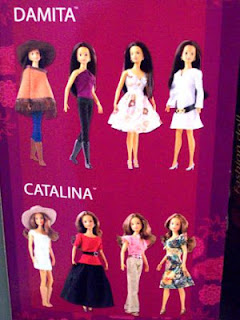 Here is a close up of the two munecas: 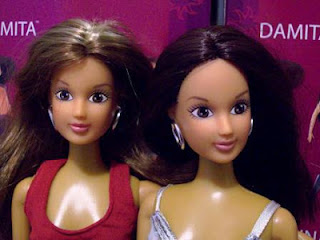 And here is a full length photo of them: 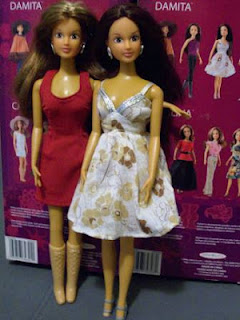 Please note: the wine red dress worn by Catalina is NOT a Jakks Pacific fashion; that dress came from an Aoshima/Skynet doll set.

* At the time the Jakks Pacific Ringside Rebels Wrestlers were produced, the wrestler entertainment group was called the World Wide Federation.
Posted by D7ana at 11:06 PM

Thanks for the information about these dolls. I have both Catalina and Damita but they were sold under the Wal-Mart brand. Both had jeans, ponchos, and big hats. I never saw evidence of the other outfits.

I remember these dolls I bought at 5 for the outfits. I bought the poncho/hat, the white cotton dress, your flower print dress, and a couple of the others. I snagged them for the clothes I think I may still have one of them here.

I found these ladies at Walmart. They had a great selection.

Hi Limbe Dolls and Dollz4Moi! Congratulations on having Catalina and Damita; they are pretty dolls. However, I prefer their clothes to them. Sigh. Shrug. I am tempted to repaint their eyes, to make them less cartoony, but then again, I am not that crazy about the face sculpt to alter them.

Hi Dana, I never heard of them. I liked the big open eyes. Thanks for sharing the find!

I have Damita in poncho (definitely) and white dress (I believe) Mine was sold under the Walmart brand also.

Glad to share these finds as Jakks Pacific dolls; I have not seen them as Walmart brand in Philly yet. (Perhaps they have not yet arrived here under that brand or they may have been issued, but I missed seeing them.

Yes, Walmart will insert itself into collectors' lives, Barbiecafe. It will. You can run, you can hide, but you can't escape dolly news ;-D

LOL, Muff, I suppose Bratz do have nostrils, but their bridges are so low ... shudder.

I don't think that the articulated Disney dolls are out yet. That or maybe the articulated ones are only available at the Disney Store? Hmmmm ... further investigation needed ;-D

Clones are just so skimpy in every way - goofy expressions, no articulation - yet they are just so darn cute in a really annoying odd way that they make me laugh. Enjoyed your post, D.

Hi Robin! Yes, this set of clones, the JP munecas have a certain deer-in-the-headlight look that - at this time - makes me think, repaint or sell. Their noses aren't big enough for me to really, strongly want to keep their heads so I'm probably going to sell them with the next batch.

Hi, thanks for the information about these dolls. I have two in my collection, but oddly they are blond. I mean totally "Barbie way" blonde. They have the same hands, faces and everything like your dolls (one of mine has rooted eyelashes). Is it possible to to have these doll in blonde version?

Hi Sinestro! You are welcome. I am always happy to share doll information ;-)

Your blond Jakks Pacific dolls might be the ones issued by Walmart that some other collectors have seen. Do you have an online photo of your blond JP dolls? On your blog or on another site? Please share the link in another message; I or someone else might recognize the series.

By the way - I LOVE your Maleficient photos on your blog. Especially the Diaval photo. He has an interesting face.

She looks similar to Catalina and Damita. Now I must find one of them for my collection :-)

Thanks for sharing that photo, Sinestro! I have seen a doll who looks like that in Toys R Us or Walmart. She was part of a set. Next time I go to those stores, I will check and write back here with a link if I can get one.

Hey!!. I don’t know if you’ll get this message or not, but I have the whole collection of the Catalina/Damita dolls all in box except for the Catalina in a pink blouse and brown pants. If you’d like to see a photo of my collection then let me know!.

Hi, Vanitydollxoxo! Thanks for sending this message: yes, yes, yes! I'd LOVE to see photos of your Catalina and Damita dolls. I'm thinking of selling my two, but I love seeing doll photos online of dolls not usually seen. I hope you see my reply. Please share your link when you can.

Hello D7ana!, hope you’re doing well and I’m so so sorry for the late response!! it’s been awhile since I’ve been on here and I completely forgot , but I was able to take a picture for you and here’s the link down below and make sure to scroll down and you’ll see my dollies!. I hope you enjoy my collection and ty for being so patient and kind! Hope to hear back soon!

Alas, VanityDollxoxo! I am doing MUCH better. Thanks for asking. Unfortunately, I was not able to get a photo of your dolls. I'd really LOVE to see them. The web address does not load anything :-(

Oh, NOT "alas" that I am doing better. (Pause to cringe at my sentence placement.) Alas that I could not see your photos.