Power Team Donkey Prances While the Devil Was Beating His Wife

Today, we Philadelphians had several sunshowers. Sunshowers, you ask. Yes, sunshowers as in rain falling while the sun shines. Or, the devil is beating his wife. Yes, I am a born and bred Philadelphian, but I have some "country" or "Southern" roots in that my father was born and raised in Georgia before he moved to Philadelphia. What has this weather condition to do with a blog about sixth scale dolls and action figures? Well, this is the day that I took the M & C Toys Power Team donkey out for photos. Hence the post title. 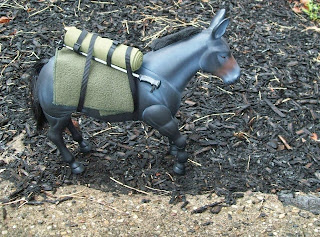 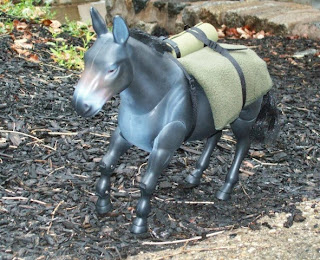 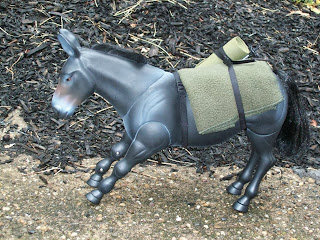 ... then rises and stretches his front legs. 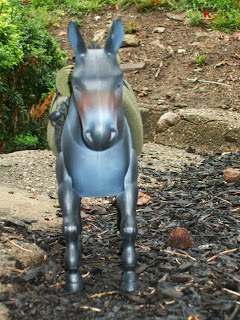 Note: I took these photos between sunshowers. The Power Team donkey is all hard plastic, but I did not want to rust his joints so there are no during-the-rain photographs. And yes, it is super cool that he can raise or lower his head and his rump and that his front "knees?" and "ankles?" can bend.
Posted by D7ana at 9:56 PM

Wow, I didn't even know this existed. I have heard that devil beating his wife, saying, too. Would you believe I saw a couple of real donkeys on Saturday, when I went to pick up my granddaughter? I'm sure that's the first one I've seen in person that wasn't at some type of zoo.

:) Donkey... outstanding in his field.

Hi Vanessa! I've never seen a real donkey, but I like this one. I'll post boxed photos of him later this week. Don't know why I dote on this one except maybe that he stands out among equine creatures? I'll see if I have - still - similar creatures. I do have a flocked pony (cutie, too, lol). Had a Jody pony once, but I don't know if I still have that one.

What did your granddaughters think of the donkeys?

My siblings and I could not figure out why the devil beating his wife had anything to do with the weather. And I wondered how did the devil rate a wife? Isn't he supposed to be in Hell and suffering, lol?

(Okay, left an opening there for any guys who want pay back for any unintended slights made here ;-)

Have you ever been married? Sometimes it feels like hell. LOL! My granddaughter wants to be a vet, so she loves all animals. She had seen the donkeys a few times before we saw them together, so there wasn't a surprise on her part, only on my part.

I love the Power Team Accessories. I've seen this donkey when I first came across that brand and I think it's really cute! In Portugal we still have "live" donkeys in some small hamlets. They are disappering but there are already some institutions and reserves to protect them :)

He is cute! What part of Philly do you live in? My sister-in-law is from Ardsley and my best friend's daughter lives in Media and I have been there many times. Good times!

We got the rain here yesterday in Syracuse too. We actually had tornado warnings but nothing came of it. It was so balmy when I left for work yesterday...not complaining, love indian summer.

Devil beating his wife, nope never heard that one but did hear the angels were bowling when it thundered.

Hello from Spain: in my country also have heavy rain and sun. I like your donkey. It looks real. Keep in touch

@Super Cool Doll House - yes, he is and so modest, too.

@Vanessa - never been married, lol. Something about that living together all the time .... Yay, for your granddaughter wanting to be a vet. Admirable to work with and for our fellow creatures.

@V. - I think we still have live donkeys here in the U.S.A. I'm an urban dweller so I don't see many larger animals often. More horses than donkeys, but there's something "cute" about donkeys that triggers an "awwww ..." response from me. Glad that you have seen the PT donkey before.

@Pattidolls - your folks are in the suburbs; I'm in the city and all throughout the city ;-) I have good times here, too.

I love Indian summer, too. Such a gentle and loving segue from summer to fall.

Yes, I've heard about angels bowling when it thunders. Rich images we have, hmmm?

@Marta - sunshowers are fun if a little inconvenient (how to dress for them, lol.) I'm glad that you like the donkey; I think he resembles the real animal, too.

Oh, and again, Happy 2nd Anniversary, Marta! This is my 5th year, but I am slow getting to celebrating.

Cute donkey! I've heard that expression about the devil beating his wife, as well. LOL@ Vanessa's comment about marriage and hell!

Hi Roxanne! I adore that donkey. Aha, so you've heard it, too, about the devil and his wife?

Love the donkey..I have the horse and wish I saw this guy. I've heard the expression before LOL. Not at the beating but LOL to the saying

Now that's a darn cool donkey! They put some great work into him. He looks like he has had a good life with a good owner.

Like Vanessa, I didn't even know this toy existed. He looks great and I love the articulation. In Melbourne we often have sunshowers, actually our weather is really changeable -it can be very hot one minute and really cold the next - we call it 'bikini and furcoat' weather.

Great photos of the donkey! When you have enough clouds to make rain but the sun is shinning through, it creates excellent diffuse light which is great for taking pictures.

I have this donkey but mine is a darker, less realistic gray.

I traveled from Saint Louis to Dakar, Senegal yesterday and saw a number of donkeys that look just like yours. Not only were they grazing along the road, some of them were also pulling carts that ran on the highway along with the cars, trucks, and buses!

As for the devil beating his wife -- when I was a child the elders would add that if you stuck a pin in the ground you could hear her holler. Of course this was a test to see if you were dumb enough to run outside in the rain!

@Dollz4moi - Oh, do show photos of your PT horse when you can. Is he articulated like this donkey - with legs that can shift, forward and back, and bendable knees?

It's amusing to hear an odd phrase that you've heard. I couldn't imagine you or me or any of us laughing at a woman being beaten.

@Muff - he's simply crafted but well done. And yes, he has a good life with a good human ;-)

I like that phrase, "bikini and furcoat weather." Mercurial weather in Melbourne? On the plus side, I suppose it doesn't get boring ;-)

@Limbe Dolls - thanks for complimenting the quality of the photos. I confess, when I saw them, I went all bouncy, happy, OMG, did I do those, lol. My outdoors photos tend to be better - and I wanted this donkey to have a nice setting - but this time, kismet.

Perhaps your donkey was produced earlier or later in the production of these creatures? That might account for the color variation.

Oh that sounds lovely. I am an armchair traveller: I watch Globe Trekker and other travel programs on our public television stations. Used to want to be an archaeologist - ha, ha - but to actually leave the USA and Philly, very scary thought. So it's fascinating to read about your experiences. Cool about the donkeys mixing it up with cars, trucks, and buses.

In Center City, you can see horse-drawn carriages for tourists, but those horses seem stressed. Center City traffic can be unpleasant - lots of vehicles, impatient drivers, loud pedestrians. ;-P

LOL at the test addition. Those rascally elders!

Every time I see a donkey - internet, movies...I remember the movie Shrek, cause the one in the movie was so cute, i just love him!Thanks for sharing the pictures.

Dana, I was thinking about you today as we encountered a couple of donkeys! Calista and Bob were there, so they can never say that they've never seen a donkey in real life. :) This is going to be a part of an upcoming Calista diary entry, but I just can't wait so I have to share this one photo with you now. Bob and Calista watch as my husband pets a donkey.

@Barbiecafe -I've seen Shrek and Shrek 2. Not sure if I saw the third one. (Don't know why I say I don't watch - didn't watch - when I meant the Princess movies ;-P) Glad this playscale donkey evoked happy memories for you!

@Roxanne - more donkeys! I love the donkey sightings; usually don't think about them, but have we been seeing them recently, lol.

I love how you added Calista and Bob so that they could see the donkeys being petted by your husband. That is a cute photo; thanks for sharing it. And I do look forward to reading new Calista stories ;-)