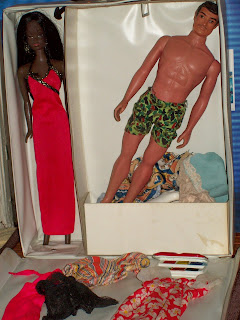 I found this single doll carrying case that houses two of my childhood dolls: Malibu Christie and a Hasbro action figure. Christie was one of my favorite dolls so while she has slight dust from being in that doll case for so many years, she is in pretty good condition. Likewise the Hasbro guy ... whom I bought in a baggie. His name is Captain Don America - at least, that is what I called him. (I don't recall his "real name.") As I took the photo, I thought

1. dust gets into doll cases

2. my Captain America was in the closet

I'm not saying that my Hasbro guy is gay. He's been Christie's companion for years. No, what struck me is that I had him in the closet area, along with Christie's clothes and accessories. OMG, it hit me, I have Kenified an action figure. I had relegated him to "accessory status."

I better duck the Joe fans.

Don's placement wasn't intentionally cruel or deliberate. It is a single doll case. It is Christie's case. There isn't enough room for Christie and Don to fit in that one doll slot. Don was in the closet so that he could share Christie's space. He was/is her man - after she had dated a brown fuzzhead G.I. Joe* and a Black fuzzhead G.I. Joe**.

I suppose I feel embarrassed that my action figures were demoted on entering my then largely doll world. They were drafted into "girl play." All their glory and ranking swept aside to allow them to support a child's storytelling. Rather like I did my dolls so maybe I was not so very bad to them after all.

*the brown-haired Joe succumbed to drink.

**the Black Joe fell apart due to drug abuse. Translated: hard play involving Joe "blowing his mind" led to a breakdown of his strung body.

Hope no one is setting up a rescue mission for my action figures. I'm sure that they are happy here. Doesn't Don look happy? 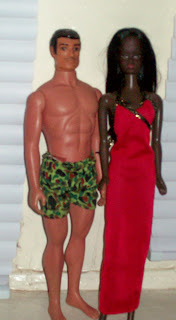 I feel happy whenever I 'unearthed' an old toy. I guess you are, too.

Regarding the Hasbro guy, is he an action figure? He doesn't look like he has Joe's joints and has more of a Ken-like articulation.

Btw, have you blogged about distinguishing a doll from an action figure? A point like that was raised on my blog and I wanted to blog about it, but... let's just say I'm still gathering info to support my stand. Hehehe.

Yes, old toys - our personal old toys - seem to absorb our history. It's like connecting to the us-before-the-present. In vague sci-fi/fantasy speak ;-D

The Hasbro guy- I need to identify him - was promoted as an action figure DESPITE his lack of joints. He was out around the same time as G.I. Joe - I had them around that time, 1974-1976. Don't know why he missed out on the usual joint treatment except possibly for budget purpose.

A post about distinguishing a doll from an action figure would be neat. About.com had two articles on the subject. I need to check to see that they are still there - under Collecting Dolls and under Action Figures. While there could be some differences, overall, there are a few points that would overlap regardless of the source.

Hiya,
My partner TheRealDollNerd identified your Hasbro guy as "The Defender." Hope that helps!

Thanks, SuperCool! And please thank TheRealDollNerd for me, too. I'll add a post identifying my Hasbro guy as "The Defender."