Warning: links show voluptuous female statues. Do not click if such images would offend you.


Booty Babe is a series of full-figured female resin statues created by Spencer Davis in 1998. The artist added clay to an unspecified 1/6 scale fashion doll, and some time later, voilà, Booty Babe was born. (You can read this interview about the artist and his work.) I first saw Booty Babe on doll enthusiast Roxanne's blog: the rounded Booty Babe offers an interesting contrast to the more familiar slim fashion dolls and action figures.

Recently, Mr. Davis launched a Kickstarter campaign to fund the production of additional 1/6 scale Booty Babe dolls/statues. That campaign netted $29, 231 dollars - surpassing the goal of $15,000 - this January. Successful campaign, yes? However, I think that these art doll/statues will remain more statue than doll in spite of the scale and the rooted hair. The line breaks for articulation would probably "disrupt" the vision.

Would I buy this doll if she were produced as an articulated doll with joints at her neck, shoulders, hips, elbows, and knees? For body diversity? To have a new face? Maybe. However, her eyes are shut. Closed eyes to me means sleeping, dead, or tuning me out. My dolls can *sleep* when I am not around - wink. I don't have any uses for a dead doll. No zombie stories pending. Tuning me out - well, that seems rude. But that's me.

Here are two other opinions. A male guest reviewer discusses his enthusiasm about Booty Babe. Another reviewer has a different stance.


You might wonder if there are any buxom fashion dolls in East Philly. Yes, there are. And they make standard Barbie look small. Here are three of them: Eegee Dolly Parton, Blue Box Perfect Body action figure, and PhillyCollector regular, Aoshima/Skynet Girl's Mission Mai. 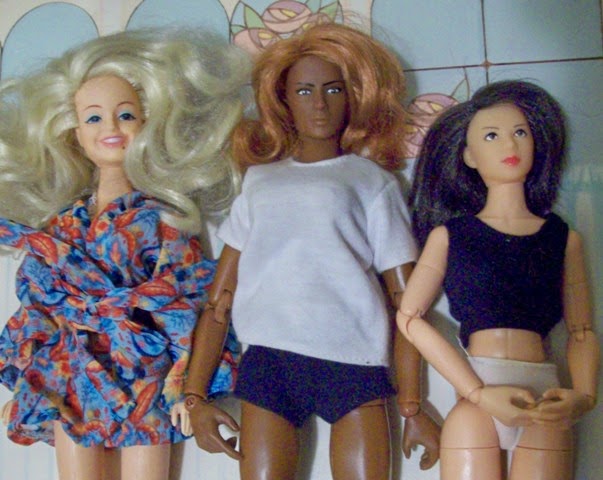 Hmm. As a connoisseur of fantasy art work, comic babes and thick women, I don't find these figures in the least bit shocking or offensive. Did the fact that a white man produces them give me pause? Yes, but only for a second. The fact that he fetishes thick black women is no different than a black man who does the same. I like red heads, Asians and fat butts... so what, lol. People like what they like and if he's making his money sculpting newdies then good for him.

Would I buy one? Nope, because I'm cheap. But if he gave me one I would sure take it and display it with my other action figures and dolls.

The statue itself is beautiful - bodywise. I agree, closed eyes are not appealing to me, either.

But on the facebook site, there was an OOAK shown with open eyes - and she was really impressive.

Apart from that, I'm with Muff: I wouldn't cough up the money for a not articulated doll - but if I was given one, she would stay.

Plus, they are figurines, lacking even the most basic articulation to be called "dolls". I feel some articulation would justify the high price. I like the body shape and if I found one for 5$ at the flea market, I'd dress the poor thing and give it eyes. As it is, though, there is nothing to entice my attention.

Somehow these statues remind me of Jessica Rabbit and similar statues. After reading the interview, I personally find this designer's fetish for voluptuous black and asian women very innocent, and his figures too. I've seen much worse (in the sense of "offensive") in the figure and statues department to be honest :-). I don't collect statues, so I wouldn't buy one, but some of them are not bad at all, if that's your taste.

I own one of the figurines. I put clothes on her because I could not leave her nude. I hope they come with articulation. I like to have a variety of fashion dolls and it is nice to see different styles and shapes.

The only thing I don't like is the Barbie base body. Adding clay and calling it original doesn't sit right with me.

Hi D7ana, the concept is interesting, even though they remind me of the pin ups of the 50's , fairly innocent ones IMHO. I believe that it would be very hard to keep the line in an articulated figure, and sewing dresses for such voluptuos ladies should be very difficult. But if they wouldn't be too expensive and my sewing skills should improve, why not?
But NEVER with closed eyes!

Welp. Yeah, looks like fetishizing, but there are lots of subcultures out there, doing their things.

I draw a distinction between "a thing exists in its narrow little niche" and a "a thing is all over mainstream stores and dominates depictions of a group." This is a niche product so far.

Personally, I wouldn't buy one (non-articulated, closed eyes, pretty clearly "about" a view of sexuality that isn't consistent with my Amazonian fashion-doll world) and wouldn't be super-comfortable with being given one. If I were dating somebody who had one, my reaction would depend on the context with what other action figures he owned or comics/videogames he was into, though; it's not an automatic dealbreaker.

These sculptures are really nice and well done. I would much prefer them with open eyes, but as one who has sculpted a few dolls, it's so much easier doing closed eyes than open ones. After reading the interview, I didn't get offended that these were created by a white man. He's a man who likes curvy black women, and who isn't ashamed to say so. I only get offended when white people produce items that are supposedly representing the black race, and they are butt ugly creations. These are beautiful. I personally know quite a few women with voluptuous bodies. They should be celebrated just like the size 2 woman.

If they made the leap from statue to doll, opened the eyes, and added fashions, it would be okay. It's good to have a wide variety of dolls available as long as they are fun to dress/style.

I like these statues very much. I would not mind owning one. I would even cast her as a sassy waitress (given her stance and facial expression) with many admirers yet she'd be unphased by their advances. I hope someone will create a pinup curvy like "doll" with articulation oneday.

There are few full-figured dolls. Body variation is welcome, I agree. But open eyes for me, too.

The cost would probably stop me. If given one, I'd accept. I would have to paint open eyes on her though.

@BlackKitty - I see what you mean ... the ones lacking full arms and legs do not look "wholesome" to me. They remind me of the movie, Boxing Helena.

@Teva Joseph - I think only the first samples were clay over Barbie. I think that's how he developed the fuller size from that model.

As you mentioned, I do have a booty babe in my collection. I look at her with her grin and her closed eyes, and she looks to me like she's having a pleasant thought that maybe she'll share, maybe she won't. When she arrived at my house, my husband looked at her and jokingly said "Oh, it's your twin!" The truth is, I look more like a booty babe than I do a Barbie doll. So she has been my avatar for as long as I've had my blog.

My booty babe purchase was somewhat of a departure from my norm. At that time, I was more interested in getting the best deal for dolls and action figures, and then (as now) I preferred articulation. When I first saw these statues, the things that held me back from immediately purchasing one was the price and the lack of articulation. Ultimately though, I liked the variety that this figure provided to my collection. I liked that she was so voluptuous. I liked the hair. I liked that she seemed so confident. I really liked the fact that the artist presented a full-figured woman as sexy.

My booty babe is a little modest. She still wears her sheer top, but she wears a black skirt that I gave her.

I would really love to see more full-figured articulated dolls!

Hi Roxanne! Your booty babe looks jazzy, cool, and sassy. Your addition of sunglasses and skirt sets her apart from the others.

Booty babe would/still does turn more heads among the guys I know. Remember The Commodores? Barbie would be criticized for not having enough meat on her bones :-)

It would be nice to have fuller figured dolls, male as well as female. That could be a niche market for some bold, enterprising entrepreneur ...

P.S. I'm more Get Set than Barbie or booty babe. Shrug. Long as my body gets me around, I'm not complaining ;-)

I saw these dolls years ago. At first, I didn't like them. They felt too "in your face"
Recently when I looked at them, I had a different take. I see them as sexy young ladies who happen to be full figured. Most of the full figured dolls/statutes seem a bit older. I still wish they weren't so provocatively dressed.
I saw they are made by a white man yes. However, isn't the woman he actually married a woman of color? That tells me it is more than a fetish but a love for colorful skin tones.
I find her too expensive which is prohibitive for the average person. Also, if she were articulated that would be awesome. But, I could see folks having them doing all kinds of things. LOL!

Hi The Grandmommy! Yes, that's it! Dressed. I prefer these "dolls" dressed as Roxanne and Male Doll World have done. It's not just nude female figures. I feel the same about nude "gendered" male figures:

"Oh you've got goodies? How precious! Now pull on some pants, dearie."

You're probably wondering, who's "The Grandmommy" now, eh?

I love these statues. It's a good thing that they are not articulated because I can imagine the perverts and racists puting these figures in some type of sick sexually demeaning position and then displaying it all over the internet. No , keep them fixed and admire them as is. As for the eyes being made shut he should make some of them open but it must be tastefully done or else it could make the figurines look creepy or offensive. Good work. I own a couple and they have increased in value since the time I purchased them.

Hi Manny Bruce! Thanks for sharing your thoughts. That's a valid concern. I'm glad that you enjoy the figures that you have ;-)