Five dolls in my collection have Ancient Egypt as the theme:

2 Mattel Dolls of the World: Princess Collection, Princess of the Nile Barbie (2001)

I will start with one of the two Integrity dolls with the Ancient Egyptian theme, Queen Adora from the Janay (Playline) series.

The backstory to this series is that Princess Janay and Prince Tariq search for Queen Adora's lost amulet. Further developments to that story starter could be completed by the child/owner of the doll(s). A Princess Janay doll and a Prince Tariq doll were also produced for this series. The prototypes for those dolls can be seen at this Master Collector link under the header "African Legends."

I bought the Queen Adora doll because she had short, tightly curled hair and an "Egyptian" style wig. How cute - a doll with a wig. And her short, cropped style is attractive on its own. Maybe I could use the wig for another doll. I recall seeing the Janay and the Tariq dolls, but the only one I wanted at that time was the Adora one. Adora also has a cardboard throne in her box that needs to be assembled. (I haven't deboxed her yet so there are no photos of the throne now.)

Other accessories with Queen Adora are a cardboard crown, cardboard ankh, gold "leather" sandals, a long sheer white gown, a white lacy stole with gold trim, a gold necklace and bracelets. Here are two photos of the Queen: 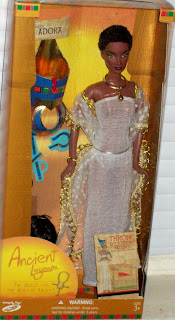 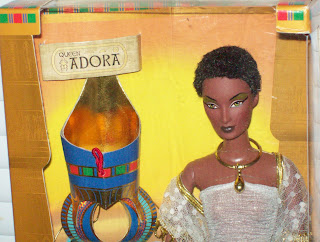 Thanks, I think she's pretty, too.

I'm wondering though, if I could use her wig to make one of my Joes look hippy-like. Hmmm ....

I'll give that idea a shot, even for just some laugh. ^_^