Re-Visiting Ryan Whitaker of Final Fantasy: The Spirits Within


Sergeant Ryan Whitaker is a minor character from a 2001 American animated movie called Final Fantasy: The Spirits Within. The movie follows Doctor Aki Ross and her allies as they battle alien invaders in the year 2065. No, I have not seen the movie. Or played the video game. I bought this action figure because he was a new-to-me African American playscale figure.

What can I tell you about Ryan Whitaker, the action figure? First, he is a ToyFare Exclusive by Palisades Toys. So he is a limited edition item. He is 11 3/4" tall - yes, just that little bit shorter than Ken. I had considered replacing his body with that of another action figure. But his articulation makes up for that height loss - he not only bends at his elbows and his knees, but his upper thigh, upper arm, and lower arm can twist. He has a pivotal waist AND he can twist his upper torso. His arms and legs can pose akimbo - out from his body.

His handsome face has nice details like five-o'clock shadow and slight stubbling of his partially shaved head. (The eyes are a little beady, but that is standard with many action figures. Shrug. Must be hard to get eyes just so in basic factory painting.)  And his head can tilt to either side although tilting down/forward is NOT an option.

What would I change? Well, he's got multiple color and texture face-body parts. His head is a matte plastic while his arms and legs are another color and type of slightly shiny plastic. His torso is an even shinier material. But the greatest sorrow for me is that he lacks ankles and feet. His boot foot is his body foot. Sigh. When I wrestled one of his boots off, I noticed this problem. Sigh again. Why do action figure manufacturers do that to their figures? I know ... because they are NOT dolls.

Right, she scowls. (She being me.)

Oh, but pictures, you say. Here they go. 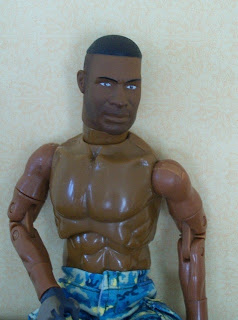 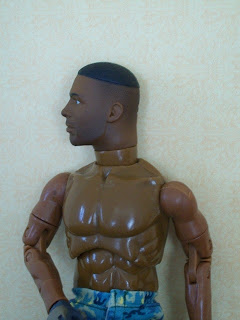 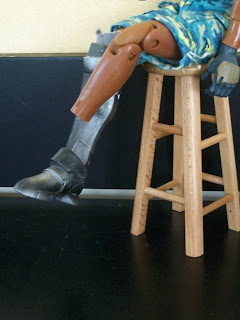 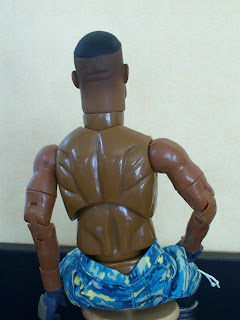 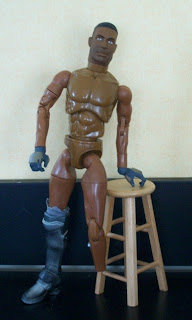 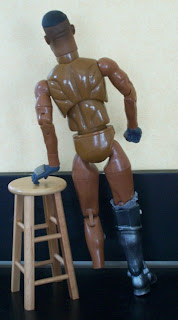 Any suggestions for ankle-feet repair welcome. He's still adorable, this Ryan Whitaker action figure. I just wish he had ankles and feet.

(Aside another collector also bought this figure on sale. You can read his post.)

I saw the movie but it was many years ago and honestly I almost don't remember anything about it. I didn't know they made action figures from it. The doll has a cute face, it's a pity that the feet are his boots, I honestly don't know what to do about them, good luck!

@V. The action figure in this case is better than the movie, ha ha. I say that because the comments about the movie are disparaging. I might have to give him feet with shorter boots ... sigh. I will see though. Glad that the rest of his body is intact though.

Yeah, my Sulu has that boot as feet and I snapped one off. It's still just dangling around. Other than permanently epoxying a leg to him I don't know how to fix your guy, with his cute self!

Hi Muff and thanks for the warning! Oh. my poor dear John Cho - I mean, Sulu 2. Oh, my poor dear George Takei - I mean Sulu 1! My poor dear Playmates guys.

Wondering if I should create ankle-feet for them ... I am sooo lazy. Hmmm ....

Isn't Ryan a cutie? Yes, yes. Love his profile. Such a fine nose and mouth.

I can investigate to see if there are bare ankle-foot parts for playscale action figures the way there are ankle-feet for Bbi/Takara Cool Girls.

Wonderful blog! Do you haѵе аny tiрs and hints for aspiring writers?
I'm hoping to start my own blog soon but I'm
a littlе lost on eѵerything. Would уou suggest ѕtarting wіth a fгeе platfоrm like Wordpгess or go for a paid oрtion?

Theгe aгe so mаnу options out there thаt І'm totally overwhelmed .. Any recommendations? Thanks a lot!

Well this just gets curioser and curioser. I have 2 Ryan Whitaker bodies. I got both of them used from another collector. One of them still has his original outfit, but without the boots. His pants are even screwed into his legs still. Both of my Ryan's have ankles and feet. The ankles and feet exactly match the legs. I'll post photos in a couple of days.

Anonymous, I apologize for my late response. I will do a blog post about blogging in the future. I use a free platform to begin my blogging. Maybe some day I will go for a paid option. No time soon though.

Roxanne ... I wonder if he has feet in the boots? My Ryan, I mean. My guy's gray cotton pants were screwed onto his legs, too. I cut that part away and threw out the cloth parts. (Might have the armor someplace ...)

I look forward to seeing your Ryan's ankles and feet. (And no, not writing that with a kinky interest, lol.) Thanks for the additional information about him.

Yes, please do cut the boot open and see if the foot and ankle are inside. I really must know. :) I've posted my photos on my blog.

Okay ... have to find the other boot. That would be great for him to have his own feet!

Hi there, I'm a big fan of your blog. I just recently ordered this same figure (still waiting for him to arrive in the mail). I was unaware that his boots weren't removable or that he wears gloves. Do you think that he would be compatible with hands and feet from another action figure? Many action figures come with removable hands & feet ie. Hot Toys, Soldier Story, DAM Toys & etc. There is a website called Monkey Depot that sells loose hands & feet for a good price, perhaps I'll check there for some hands & feet that will match his skin tone. Worst case scenario I can try super gluing the feet to his ankle after removing his boots & do the same with his hands. Any info is appreciated... Keep up the good work!

Hi and thanks for being a fan of my blog, Thisisnova! Ryan has feet in his boot: check this post. So you do not have to buy him feet. Or use glue. Whew.

I have not replaced his hands yet. So I do not have a specific brand or type to suggest. His complexion is a pretty, warm mahogany brown. Medium color.

I would not get the mitt-style hands like the Hot Toys hands for your Ryan figure. His gloved hands are on a rounded hinged connection that fits into his lower arm. There is no ball joint to attach the Hot Toys mitt hand onto.

I do recommend Monkey Depot as a playscale vendor. Other vendors I have used are Cotswolds although the AA male figure they have is a darker complexion and Old Joe Infirmary.

I'll post a query asking for suggestions for replacement hands for Ryan and similar action figures. I will need to take a good photo of his hand connection so I might not put that post out until this weekend. I'll also check among figures I have.